For more than ten years, The Harris Foundation has awarded one deserving eighth grade student attending the Dr. Bernard A. Harris, Jr. Middle School in San Antonio, Texas with a Harris Scholar Scholarship award for their outstanding academic achievements.

Each school year, the school’s guidance counselor selects a graduating eighth grader to receive the Harris Scholar Award. The 2016 Harris Scholar recipient, Victoria Stuart, recently had the opportunity to attend the San Antonio Aviation and Aerospace Hall of Fame Gala this past March, where she met Dr. Bernard Harris during his Hall of Fame induction ceremony.

On the photo above: 2016 Harris Scholar Award recipient, Victoria with Dr. Harris and her father.

Victoria and her father thanked Dr. Harris personally for the scholarship she received and attributed her new found love for science to Dr. Harris’ personal journey and achievements in academics. In a letter a Victoria wrote to Dr. Harris she stated, “My middle school years were filled with difficulties and I often felt lost and unsure of myself. However, after receiving the scholar’s award I realized that I could actually achieve my dreams through hard work and determination. Thank you for inspiring me to believe in myself, not only academically, but in my own potential. You have truly made a difference in my life.”

In honor of the Harris Scholars ten year anniversary, the school dedicated a plaque to Dr. Harris and The Harris Foundation for his many years of support and encouragement of their school’s staff and entire student body. 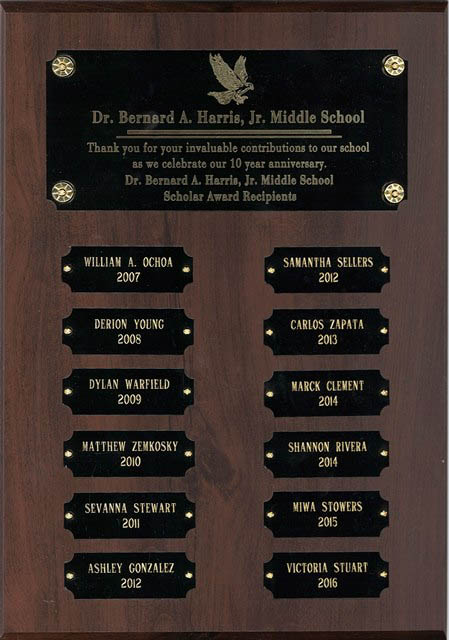